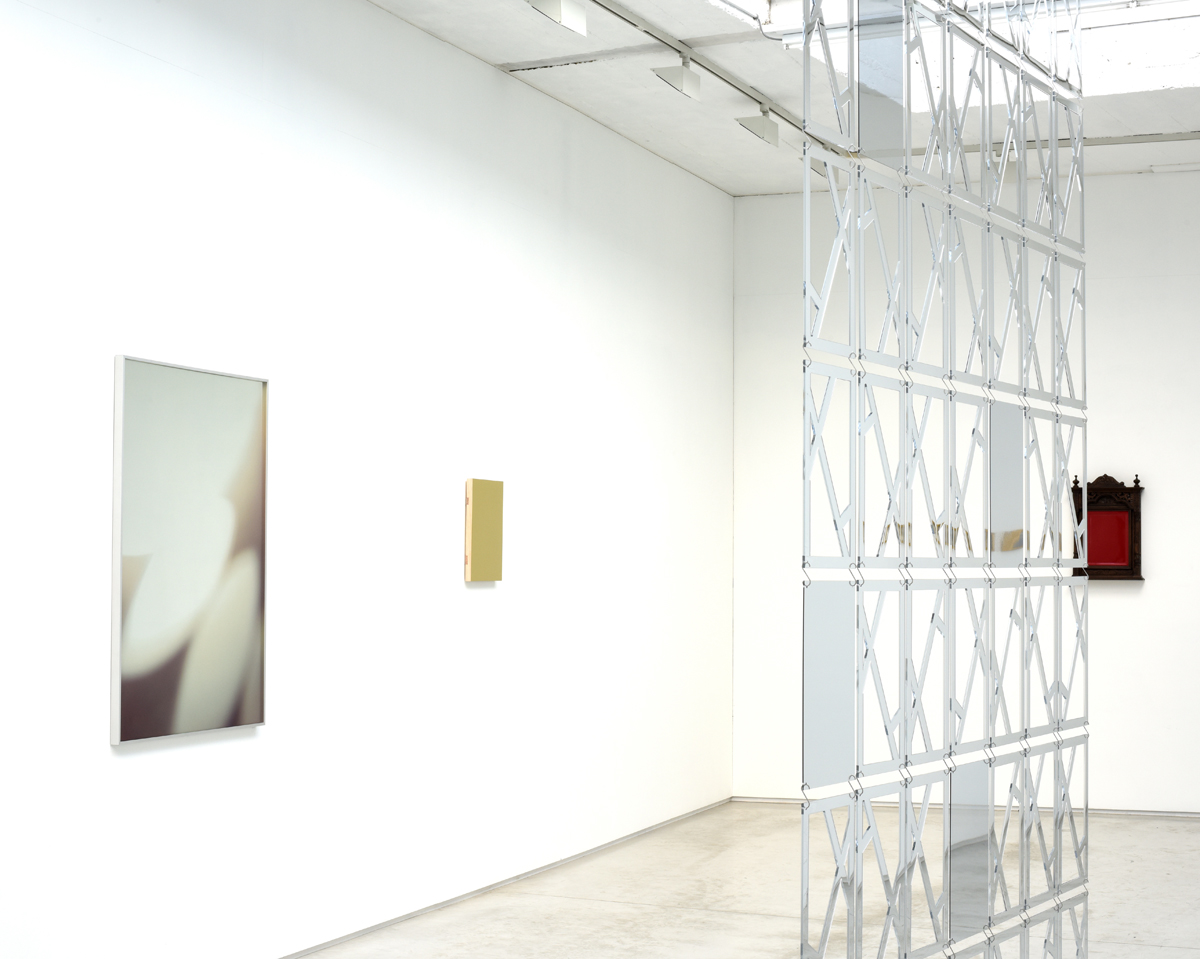 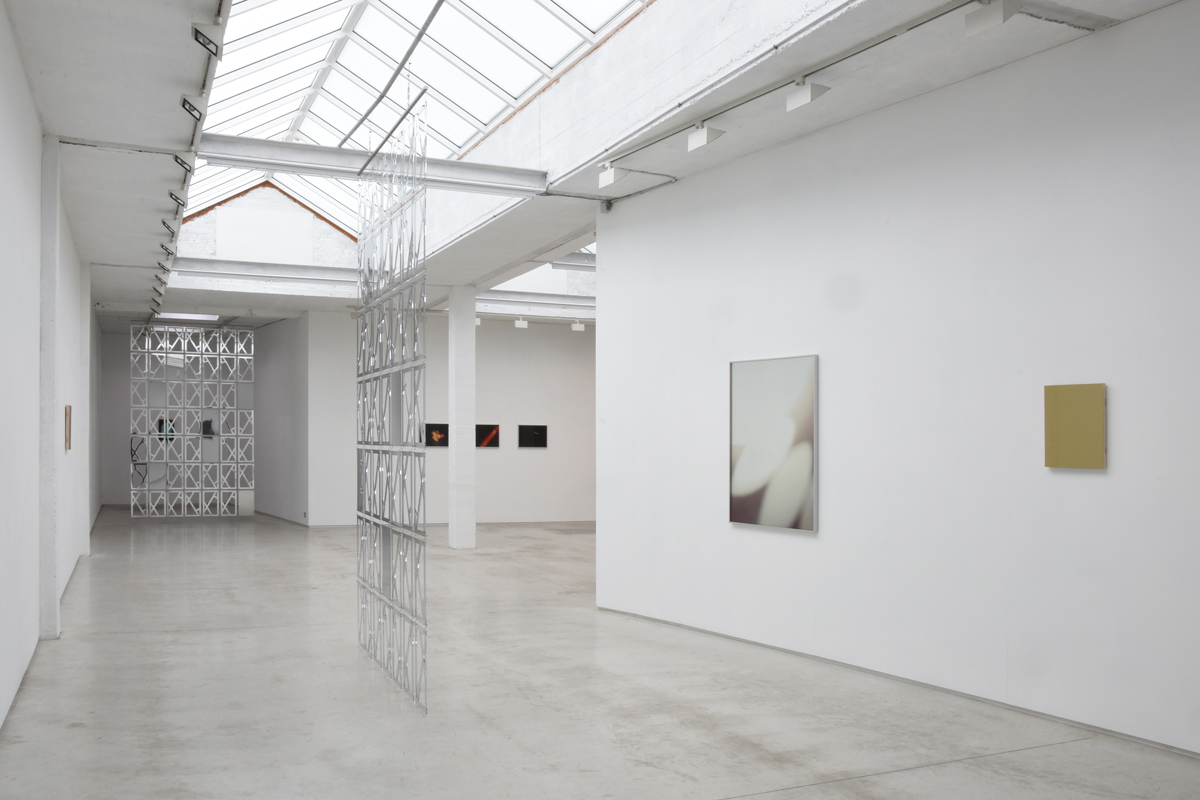 The work exhibited, ‘Marauding in Molenbeek’ (2017) is the latest addition to an ongoing series that began in 2006 titled Chicago Marauders. Marauding refers to the artists practice of constantly being on the lookout for subjects of interest. These works for the most part consist of reflective materials such as mirror Plexiglass.
The mirroring surface reflects its still surroundings but it also serves as an animator of the space as the viewer passes often stopping at a point of interest or wonder. The parts that make up the various works belonging to this ongoing series vary from work to work not on a specific manner in relation to the location but according to the interest of the artists as they push the works of this series slowly to its limit. For this occasion the artists are introducing surveillance / two way mirror components, further complicating the viewers experience of the work.
The art of Carla Arocha & Stéphane Schraenen evokes many relationships with preceding movements in art. Almost all of these associations relate to the umbrella of Modernism and the gradated ontology of its progeny later in the twentieth century; it evokes the formal qualities of Minimalism as much as the optical illusions of Op Art.
And yet, it is actually neither. It is not what it is and it is not what it seems. Hidden beneath the outward layers of immediate similarity is a practice that, while never denying what it admires about or has learned from these movements, remains fundamentally post-modernist; post-modern not as a visual facsimile of the received vernacular from the 1980’s, but in terms of the oft-misunderstood philosophies and bodies of theory accurately associated with the term.

Their focus is less on objects as manifest things and more with the perception of things as objects. Ultimately, their installation sculptures are flat, composed of many small components but they can be perceived a monumental and emphatic. This overt presence of the formal and conceptual in Arocha – Schraenen’s work can be deceptive. Everywhere within works – whether bluntly opaque or deceptively transparent – we encounter the narrative.

Theirs is a practice full of implied stories, flickers of meaning or potentially autobiographical fragments. It is cinematic without initially appearing so. It is the accumulation of precisely placed ideas into a locus in which the narrative experience of the sentient organism is never underestimated. The formal aspects of the work rely strongly on the conscious experience of sensory perception and its gradual shifts: the audience lives through a narrative in seeing other narratives present.

Their work evidences a certain preoccupation with setting up an experience in which the viewer must inevitably vacillate between the experience of subjectively and imaginatively trying to decipher potential narrative meaning and the experiences of numerous elements that act as a kind of alienation device, constantly pulling the viewer back to a conscious awareness of its construction. And, perhaps, this tension between the narrative and the formal is particularly evident in more recent works.

In deciphering if and how meanings exist between the works that constitute the whole of an exhibition by Arocha – Schraenen, we are always forced to confront a certain literal and metaphorical opacity. And yet, in the shimmers of human narrative that cannot be hidden, no matter how disciplined the formal aspects, the audience is drawn through kind of experiential parcours in which it too may become ghostly actors within it, its reflections unable to elude certain surfaces.

Beauty here is something that involves complex systems and relationships between smaller elements. The recognition of exactly how an image has been made -and the use of smaller building blocks to make it- refracts our attention to consider how the aesthetic values embedded in visual languages cannot exist without certain biological and emotional human responses. In the hands of the artists, the original objects are transformed and reconsidered. But it is the perception of the viewer, drawing on biological and social systems, that completes its transformation into an artwork. No longer neutral, their works speak of anatomy, art history, lives lived, resonant popular narratives and beauty.

The photographic works Sun and Moon are two works from 2007. Both represent moved images of light. These images are printed behind glass and backed by a mirror. Both works being polyptych they work on a cinematic level, a sequence rather than a narrative. As Stan Brackage scratched on the celluloid, the artists procured the ‘scratch’ by erratically moving the camera while taking the picture.